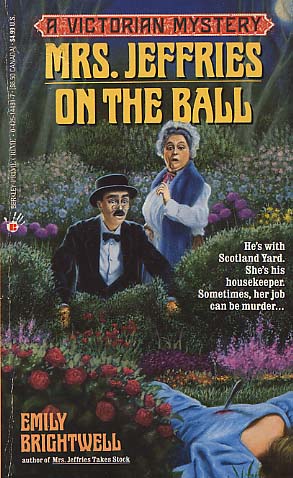 Share:
DINNER, DANCING ... AND DEATH
The Jubilee Ball in honor of Queen Victoria was meant to be a festive affair... but for Hannah Greenwood, it was a fatal event. Since the victim belonged to the prestigious Hyde Park Literary Circle, the shadow of suspicion falls on her fellow members. And since Inspector Witherspoon was a guest at the ball, the job of finding the murderer falls to him. Fortunately, Mrs. Jeffries is there to help him read between the lines--and identify the guilty party behind this deadly plot...

IS THERE A DETECTIVE IN THE HOUSE
She keeps house for Inspector Witherspoon...and keeps him on his toes. Everyone's awed by his Scotland Yard successes--but they don't know about his secret weapon. No matter how messy the murder or how dirty the deed, Mrs. Jeffries's polished detection skills are up to the task ... proving that behind every great man there's a woman-and that a crime-solver's work is never done.

Meet the Inspector and Mrs. Jeffries--in a delightful new mystery series set in Victorian England--and featuring the most charming characters ever to crack a case!