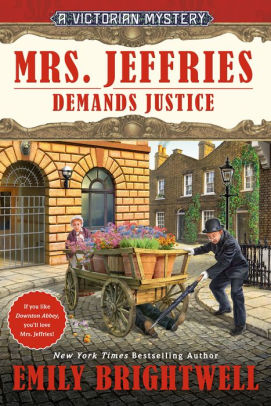 Share:
When Inspector Witherspoon's conniving nemesis finds himself facing a murder rap, Mrs. Jeffries and her upstairs/downstairs band of merry sleuths go hunting for the truth in this all-new installment of the beloved Victorian Mystery series.

Former Inspector Nigel Nivens is desperate to get away from his current assignment in the East End of London but even his powerful family can't help him after he maliciously tried to hobble Witherspoon's last homicide investigation. But Nivens has a plan. After a particularly audacious robbery in Mayfair, Nivens arrests three members of a gang of robbers. He's made sure the charges against the three will stick as he's paid an informer to testify against the brothers when the case comes to court. The snitch, a nasty little fellow, lies his head off in court and the brothers are convicted.

Unfortunately for Nivens, the snitch is murdered with a gun from the Niven's family home and there are witnesses who overheard Nivens threatening him (apparently, he wanted more than the few pounds Nivens paid him to lie). But the most damning evidence is that a pillow used to silence the shot is found in Niven’s home. This time, Nivens knows he's in real trouble. The investigating officer as well as the rank and file constables working the case hate him and he's fairly sure they're not overly concerned with proving his innocence.

Desperate and terrified, he does the only thing he can to save himself--he begs Inspector Witherspoon and Mrs. Jeffries for help. Despite finding Nigel Nivens truly odious, in the interest of justice Mrs. Jeffries and the Witherspoon household will have to catch the real killer to save the disgraced officer from the hangman's noose.