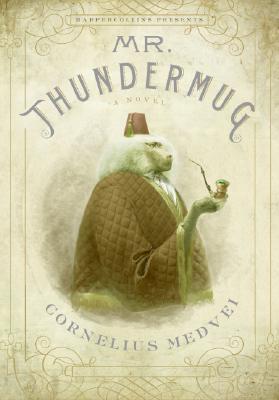 Mr. Thundermug is the inventive, entertaining, and--against all odds--poignant story of an animal who acquires the ability to eloquently speak human language. Using his own beautiful, eerie lithograph illustrations, Cornelius Medvei places us in a vivid world that is both familiar and alien. It's a world in which Mr. Thundermug and his family take up occupancy in an abandoned apartment building. On the roof of that building, Mr. Thundermug gazes at the heavens and thinks deep thoughts while his wife picks bugs off him and eats them. Understandably, he's somewhat confused by his complex existence as a fluent member of human society who has the essential nature of a more ancient species, but he assimilates as best he can. His worlds inevitably collide, and he is eventually brought to court for a petty crime and asked to defend himself in impossible ways.

Simultaneously playful and foreboding, Mr. Thundermug announces the arrival of a bold and imaginative talent.
Reviews from Goodreads.com