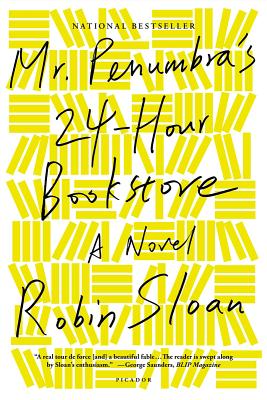 The Great Recession has shuffled Clay Jannon out of his life as a San Francisco Web-design drone -- and serendipity, sheer curiosity, and the ability to climb a ladder like a monkey has landed him a new gig working the night shift at Mr. Penumbra's 24-Hour Bookstore. But after just a few days on the job, Clay begins to realize that this store is even more curious than the name suggests. There are only a few customers, but they come in repeatedly and never seem to actually buy anything, instead “checking out” impossibly obscure volumes from strange corners of the store, all according to some elaborate, long-standing arrangement with the gnomic Mr. Penumbra. The store must be a front for something larger, Clay concludes, and soon he's embarked on a complex analysis of the customers' behavior and roped his friends into helping to figure out just what's going on. But once they bring their findings to Mr. Penumbra, it turns out the secrets extend far outside the walls of the bookstore.

With irresistible brio and dazzling intelligence, Robin Sloan has crafted a literary adventure story for the twenty-first century, evoking both the fairy-tale charm of Haruki Murakami and the enthusiastic novel-of-ideas wizardry of Neal Stephenson or a young Umberto Eco, but with a unique and feisty sensibility that's rare to the world of literary fiction. Mr. Penumbra's 24-Hour Bookstore is exactly what it sounds like: an establishment you have to enter and will never want to leave, a modern-day cabinet of wonders ready to give a jolt of energy to every curious reader, no matter the time of day.
Reviews from Goodreads.com

This book is genre-breaking, but a must-read for bibliophiles and/or those people who like to mess around with secret codes with hidden meanings. Following is actually the last paragraph in the book, but it perfectly describes the whole book, the atmosphere, the mystery and the wonder.
"A man walking fast down a dark lonely street. Quick steps and hard breathing, all wonder and need. A bell above a door and the tinkle it makes. A clerk and a ladder and warm golden light, and then: the right book exactly, at exactly the right time."
If that doesn't describe the wonder and amazement a reader feels when they walk into their favourite bookstore, I don't know what does. The book is all about that, and about a mysterious society that has been around for 500 years, and the code-breaking exercises all members must attempt if they want to belong to the society. In amongst all the musty books, and strange people we find Clay Jannon, an under-employed, computer whiz who just happens to love books and the people who love books. Clay has found employment at a 24 hour bookstore located in San Francisco, where he meets all sorts of strange people, and a whole bunch of mysterious books that are apparently all in code. His curiousity sets him on a strange journey to try to find out the secrets hidden in the "waybacklist" in the store where he works. The mix of musty old books, and cutting edge technology was enthralling. If you are in the mood to read something a little different, you might try this book. Its mesmerizing and different, but well worth the effort. 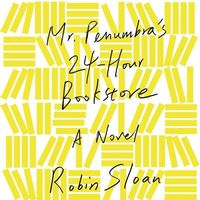