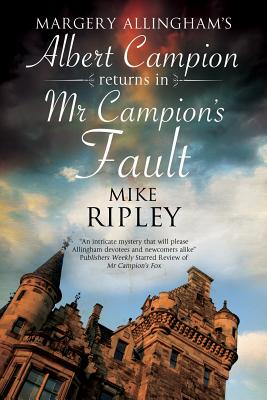 
Margery Allingham's Mr. Campion finds himself a fish out of water when he investigates a murder in a Yorkshire mining village.

Following the death of the senior English master in a tragic road accident, Mr. Campion's son Rupert and daughter-in-law Perdita are helping out at Ash Grange School for Boys, where Perdita's godfather is headmaster. While Perdita is directing the end-of-term play, a musical version of Dr. Faustus, Rupert is tackling the school's rugby football team -- and both of them are finding their allotted tasks more of a challenge than they had anticipated.

When the headmaster telephones Albert Campion to inform him that Rupert has been arrested, Mr. Campion heads to Yorkshire to get to the bottom of the matter. There are no secrets in the traditional mining village of Denby Ash, he's told -- but on uncovering reports of a disruptive poltergeist, a firebrand trade unionist, a missing conman and a local witch, he finds that's far from being the case. And was the English master, Mr. Browne's, death really an accident...?