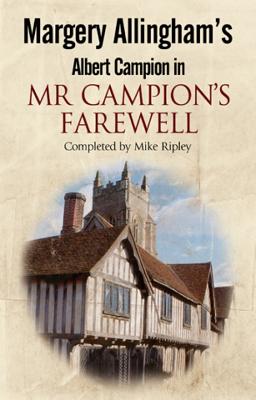 
"The idyllic English village of Lindsay Carfax isn't run by the parish council, the rating authority, the sanitary inspector nor the local cops as you might suppose. The real bosses are the Carders--something to do with wool, four hundred years back. They wound stuff on cards, I suppose. But these boys are very fly customers--they're right on the ball. Boiled down, it comes to this; they're a syndicate who run this place--which makes a packet--with their own rules. One way and another they probably own most of it."

Thus ruminated Superintendent Charles Luke to Albert Campion who was contemplating visiting his wayward artistic niece in Carfax. And when a missing schoolteacher reappeared after nine days, and Campion's car was “inadvertently” damaged, not to mention Campion himself, then all the signs were that not all was what it seemed.

Campion himself plays the central role in this quintessentially British mystery, but there are appearances too from all of Margery Allingham's regular characters, from Luke to Campion's former manservant Lugg, to his wife Lady Amanda Fitton and others. The dialogue is sharp and witty, the observation keen, and the climax is thrilling and eerily atmospheric.