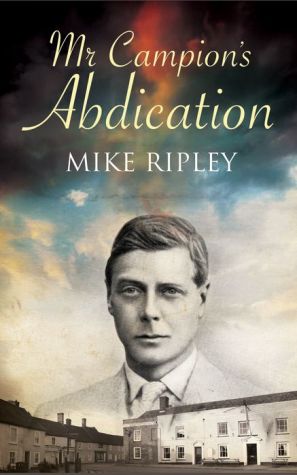 
‘So where exactly did Albert Campion stand on the Abdication?' ‘Behind the throne, slightly to the left?' suggested Commander Charles Luke.

Margery Allingham's Mr Campion finds himself masquerading as technical advisor to a very suspicious but glamorous Italian film producer and her crew hunting for buried treasure that never was in the Suffolk village of Heronhoe near Pontisbright which used to host trysts between Edward VIII and Mrs Wallis Simpson.

‘When it came to the Abdication Crisis in '36 those dirty week-ends in Heronhoe were quickly forgotten, except not by the Prince. The story goes -- that when he married Mrs Simpson, in 1937 that would be, he actually sent a valuable thank you gift to Heronhoe. That was what became known as the Abdication Treasure although there's no record of anything going to Heronhoe Hall, or of anybody ever receiving anything from the Duke of Windsor and nobody anywhere claims to have actually seen anything resembling treasure.'

‘So how is Albert Campion involved? You said the treasure doesn't exist.'

‘It doesn't,' Lord Breeze said firmly, ‘and I have been instructed to tell you to tell Campion, that unless he wants to risk embarrassing Buckingham Palace, he'd better lay off. There's no such thing as the Abdication Treasure, so there's nothing to find and Campion had better make sure he doesn't find it!'