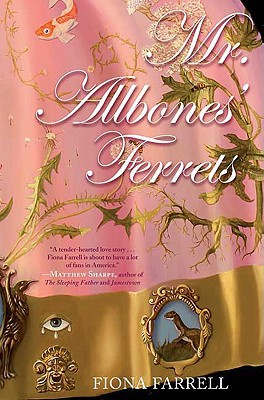 A young man out poaching. A beautiful maiden in a mysterious house. A perilous voyage to distant islands.

A literary sensation from New Zealand, Mr. Allbones' Ferrets introduces a stunning new writer to American readers. The winner of numerous literary awards in New Zealand, Fiona Farrell is poised to capture a whole new continent of fans with this latest book.

A chance encounter one night introduces our hero, Walter Allbones, to the beautiful Eugenia and her grandfather, Pitford, a natural scientist and collector of rare birds. Allbones is a ferret whisperer, so to speak, and Pitford recruits him to collect a bunch of ferrets for export.

Within months of their meeting, the three embark upon a perilous voyage that will produce most dramatic and unexpected results. Mr. Allbones' Ferrets is an enchanting novel with a tender, unusual, and completely unforgettable love story at its center.
Reviews from Goodreads.com