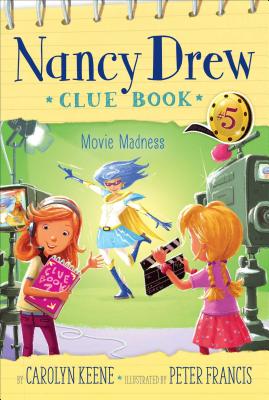 Help Nancy and her friends find a prop that's gone missing from a superhero movie set in the fifth book in an interactive Nancy Drew chapter book mystery series. Grab a piece of paper and get ready to jot down your own ideas and solutions to the case!

School is out for summer and the timing is great because a movie is filming in River Heights, and Nancy, Bess, and George -- along with a bunch of their classmates -- get to be extras in a scene shot at the playground!

The movie features Glam Girl, a fashion-forward superhero who gets her powers through her clothes. When the girls arrive on set, they catch a glimpse of the super shoes that give Glam Girl the ability to run, jump, and kick with super-speed. An assistant explains to them that there is only one pair in existence and that they were custom-made for the actress Shasta's feet.

Everyone goes wild as Glam Girl runs into the playground, blue shoes glimmering. But when Shasta's on a between-scenes break, the shoes go missing! The director says that if the shoes aren't found, they'll be leaving River Heights and their scene won't make it into the movie! Good thing Nancy happens to have her most important prop right in her pocket -- her clue book.

Who took the blue super shoes? Was it Paloma Garva, who needs a pair of blue shoes for her Junior Fashion Show? Was it Rosie the stunt-woman, who seems to envy Shasta's spotlight? Or was it the Popcorn Peeps, their classmates' film club, who need movie relics for their new museum?
Reviews from Goodreads.com