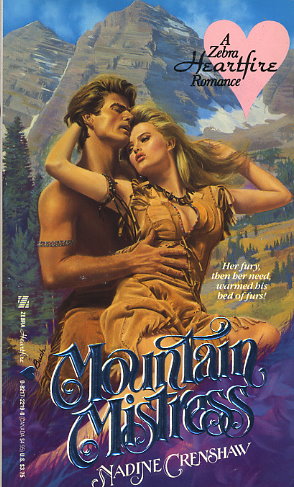 RESCUED BY A RAKE
When a muscular, handsome trader bought her freedom from her Blackfoot captors, Victorine's thanks knew no bounds. Surely he'd deliver her from these uncharted Rocky Mountains back to civilized Philadelphia. Then the blackguard announced that she'd stay with him as his bride -- and the headstrong beauty's gratitude turned to outrage. Never would she submit to such a brute; never would she allow him a husband's privileges. But as the powerful woodsman worked his sensual magic on her the innocent blonde's protests drowned beneath her uncontrollable gasps of ecstasy!

ENTRANCED BY A VIPER
The instant hot-blooded Cougar saw the Indian warrior's new slave, the virile adventurer knew he had to have the curvaceous captive for himself And once he paid two bales of beaver for her, he realized that there was no one in the unsettled wilderness to challenge his right to the wench. It didn't matter to the rugged frontiersman that she ceaselessly swore she'd never let him near. Soon he'd be silencing her pretty lips with kisses, demolishing her precious pride with embraces... and proving just how mistaken she was as he claimed her as his loving MOUNTAIN MISTRESS