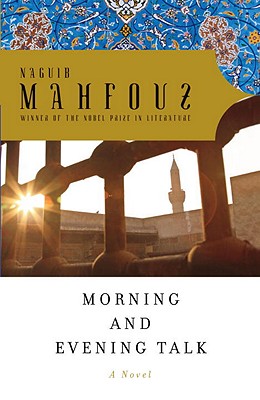 This unusual epic from the Nobel Laureate Naguib Mahfouz portrays five generations of one sprawling family against the upheavals of two centuries of modern Egyptian history.

Set in Cairo, Morning and Evening Talk traces three related families from the arrival of Napoleon to the 1980s, through short character sketches arranged in alphabetical order. This highly experimental device produces a kind of biographical dictionary, whose individual entries come together to paint a vivid portrait of life in Cairo from a range of perspectives. The characters include representatives of every class and human type and as the intricate family saga unfolds, a powerful picture of a society in transition emerges. This is a tale of change and continuity, of the death of a traditional way of life and the road to independence and beyond, seen through the eyes of Egypt's citizens. Naguib Mahfouz's last chronicle of Cairo is both an elegy to a bygone era and a tribute to the Egyptian spirit.
Reviews from Goodreads.com