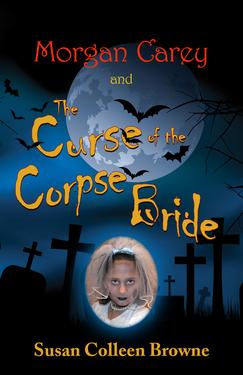 A Halloween and Day of the Dead Chapter Book for Tweens, with lots of Dia de los Muertos myths and legends...

In this family-friendly Halloween fantasy, Morgan, a 5th grader, has chosen the coolest costume ever—a dead bride. But when she finds a strange fortune-telling machine at the mall on Halloween, she has no way of knowing that she has encountered some powerful magic—and entered a world where her Halloween costume has become all too real.

The next morning, the Dia de los Muertos, the Day of the Dead, she discovers she's the victim of a curse...and faces a terrible dilemma. Will Morgan and her best friend Claire be able to break the spell? Or is Morgan doomed to be cursed by the Corpse Bride forever?

The Curse of the Corpse Bride tells Morgan's story with humor, drama and just the right touch of scariness...and the print book makes a perfect Halloween or Day of the Dead party favor too!

Book 2, Morgan Carey and The Mystery of the Christmas Fairies, and Book 3, The Secret Astoria Scavenger Hunt are also available in print and ebook.
Reviews from Goodreads.com