More Than You Know — Judith Kelman 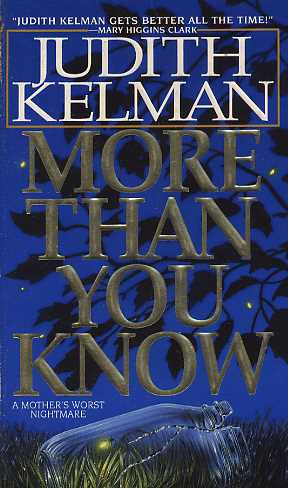 A PREDATOR ON THE PROWL
A self-proclaimed recovered child molester is the subject of Dana Saunders's controversial talk show, Back Talk. Though Dana deftly handles the tangled debate over the possibility of real reform, by the end of the taping she's certain her guest, whose identity is concealed by a disguise, is a very dangerous man. And perhaps a personal threat, as a staffer's slip creates a breach in the wall of anonymity Dana has built to protect her adolescent daughter, Becky, a gifted violinist.

A CHILD IN DANGER
A rapist is operating in the area, preying on girls not yet in their teens. Firefighter Lennie Finn finds herself involved in the case when she comes to the aid of a distraught young victim, Kitty Dolan. Getting in deeper than she knows is wise, Lennie fights to put Kitty's life back together - and to confront the painful secret she's kept hidden for years: the attack that shattered her own childhood, and the emotional scars she still bears.

LIFE IN THE BALANCE
Both women will risk everything to track down a human monster. But as they take each step in the direction of danger, the stakes keep rising. For the attacks are growing more violent, and coming closer together. And the rapist is nearing Dana's posh New York home...and twelve-year-old Becky.
Reviews from Goodreads.com