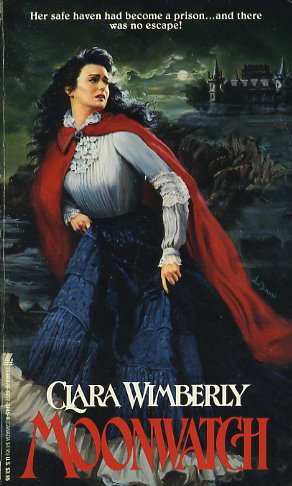 "Leave Moonwatch? No, indeed, my dear Victoria. You will never leave."

Victoria Ancona's father had died suddenly--and without telling her the truth about his disastrous business dealings with the Hayne family of Cape Fear, North Carolina. Orphaned and alone, her hope of becoming a teacher shattered, Victoria had no choice but to accept the hospitality of the Haynes, at least until her debts were settled. Saddened and fearful of her uncertain future, nagged by an indistinct memory of vague warnings, Victoria traveled reluctantly to the fabled Moonwatch, a dark, craggy structure that seemed to sit like some giant bird, still and watchful upon its wind-ravaged perch.

She expected a cool reception from the widow Hayne, but nothing had prepared her for the woman's icy hostility and the strangeness of her son and daughter, united in bitterness against Victoria yet unwilling to allow her to leave. Denying her alarming attraction to the stormy Nicholas Hayne. Victoria began to plan her departure, but when she stepped out onto the spray-drenched balcony and heard the heavy door slam behind her, she knew that only a miracle could help her escape the beleaguered towers of Moonwatch
Reviews from Goodreads.com