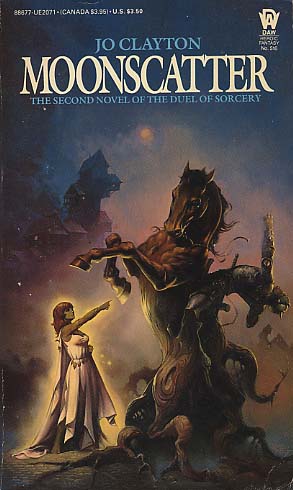 With skin as pale and eyes as black as death, a blood-red ruby depending from one nostril, he was Ser Noris, the most villainous wizard of all time. He had done it all-slain all adepts worth his scorn, attained immortality, become the dire tyrant of the Sorcerers Isles and a shadow of doom on the lands beyond. But it wasn't enough....

There was yet one opponent he had not humbled--She whom men called Maiden; She who was implicit in the alternation of death and birth, the cycling of the seasons, the complex circling of the moons. She who was the phoenix-the spirit of the earth itself?

This is the novel of Serroi, brave warrior-woman of the meie, who knows she must overcome the ties set on her by Ser Noris, who raised her as his tool, or see her world crumble.

But can she withstand being a pawn in a power game between the most virulent fiend of all time and the spirit of Nature herself?
Reviews from Goodreads.com