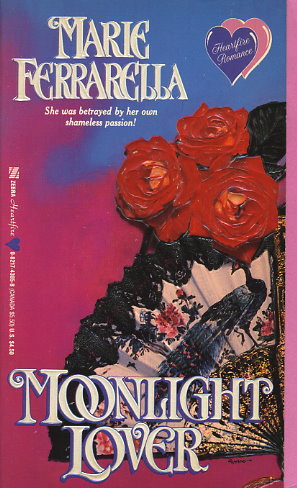 AN UNFORGIVING HEART
In the bitter wake of devastating tragedy, Rachel O'Roarke and her brother had fled Ireland to seek refuge on the shores of Colonial America. But Rachel could never forget how the British had destroyed her family, and knew she'd hate them until she died. Then a tall, blond-haired stranger showed up on the doorstep of their Virginia home. His name was St. John Lawrence, he was obviously English...and far too handsome for his own good. Though she vowed to have nothing to do with him, the spirited, flame-haired beauty soon found herself unable to resist his virile charms...especially when he swept her into his arms in the silvery moonlight and claimed her lips in a heartstirring kiss that made her senses reel and her heart cry out for his loving caress!

AN UNRELENTING PASSION
St. John had turned his back on his oppressive homeland to throw in his lot with the rebels. But the former officer found himself facing off against a very different kind of adversary when he escorted drunken Riley O'Roarke home...and was confronted by a fiery Irish beauty wielding loaded musket! Headstrong Rachel O'Roarke made it clear that he was unwelcome in her home. But the reluctant passion blazing in her emerald eyes told a different story indeed! And now all the enflamed Englishman wanted to do was draw her lush curves close against him, kiss her until she begged for more -- and possess her forever in love's ultimate embrace!
Reviews from Goodreads.com