Mistress of the Monarchy — Alison Weir 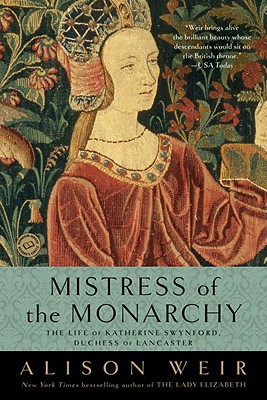 Acclaimed author Alison Weir brings to life the extraordinary tale of Katherine Swynford, a royal mistress who became one of the most crucial figures in the history of Great Britain. Born in the mid-fourteenth century, Katherine de Roët was only twelve when she married Hugh Swynford, an impoverished knight. But her story had truly begun two years earlier, when she was appointed governess to the household of John of Gaunt, Duke of Lancaster and fourth son of King Edward III. Widowed at twenty-one, Katherine became John's mistress and then, after many twists of fortune, his bride in a scandalous marriage. Mistress of the Monarchy reveals a woman ahead of her time -- making her own choices, flouting convention, and taking control of her own destiny. Indeed, without Katherine Swynford, the course of English history, perhaps even the world, would have been very different.
Reviews from Goodreads.com