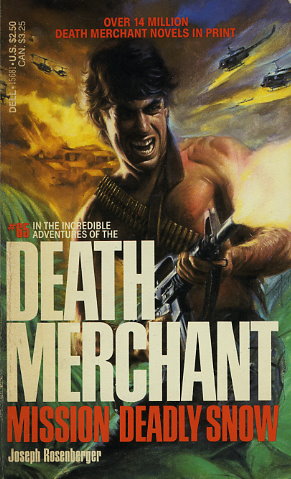 THE CUBAN CONNECTION
Somewhere under the rich canopy of the Colombian jungle is the nerve center of the world's largest drug operation. And right now twenty thousand kilos of cocaine are being processed for shipment to Havana -- to be used as a weapon of subversion against the U.S.

Determined to put a stop to the plan, the CIA has established a base in Peru. But Richard Camellion isn't satisfied with that. For behind the cocaine, backed by the whole might of the KGB, stands a man whose name is whispered in fear, a shadowy legend. And the chance to seek out and destroy his archenemy El Cobra is more than a challenge. For the Death Merchant it's a sacred mission....

Volume #65 in the nonstop, high-voltage adventures of Richard Camellion. Totally fearless, a warrior-for-hire at the service of America's most secret security operations, he operates internationally with savage ease. Weapons and martial-arts expert supreme, he executes missions with stone-cold cunning. His enemies can do no right. His friends can do no wrong. A lone master of lethality, destruction, and disguise, he'll go anywhere, stop at nothing to get the dirty work done, to earn the name you know him by: The Death Merchant.
Reviews from Goodreads.com