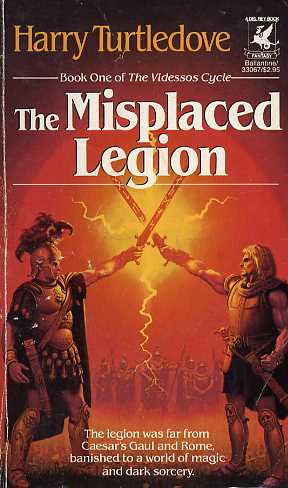 NO ROADS TO ROME

One moment, they stood under the skies of Gaul, facing each other in a strange duel of survival. In the hand of the Roman tribune Marcus Scaurus was the spell-scribed sword of a Druid priest. The Celtic chieftain Viridovix held a similar sword, bespelled by a rival
Druid sorcerer.

Then, as the two swords touched, a dome of golden light flared out and surrounded Marcus, Viridovix, and three cohorts of Caesar's legions. The next moment, they found themselves under a strange night sky where no stars were familiar and where Gaul and Rome were unknown. They were in an outpost of the embattled Empire of Videlsos--in a world where magic and dark sorcery would test their skill and courage as no Roman legion had ever been tested before.
Reviews from Goodreads.com