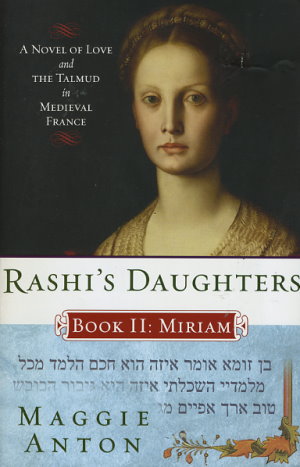 THE SECOND NOVEL IN A DRAMATIC HISTORICAL TRILOGY ABOUT THE LIVES AND LOVES OF THE THREE DAUGHTERS OF THE GREAT TALMUD SCHOLAR, RASHI

Troyes, France, 1078. As Salomon ben Isaac teaches his lively and daring middle daughter, Miriam, the intricacies of the Talmud, he has no idea how far she will push the boundaries.

Emboldened by her knowledge and mourning the death of her betrothed, Miriam is determined to become not only the community's midwife, but also its mohel--performing circumcisions. As devoted as she is to her chosen path, she cannot foresee the ways in which she will be tested and how heavily she will need to rely on her faith. And when a shadowy new suitor arrives in Troyes -- an exceptionally learned and handsome young scholar who struggles with a secret that, if revealed, would expose them both to ruin--the formidable and independent Miriam must decide if they could forge a life together.

Author Maggie Anton brings the eleventh century to vivid life with Miriam, which poignantly captures the struggles and triumphs of this strong Jewish woman.
Reviews from Goodreads.com 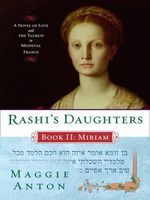