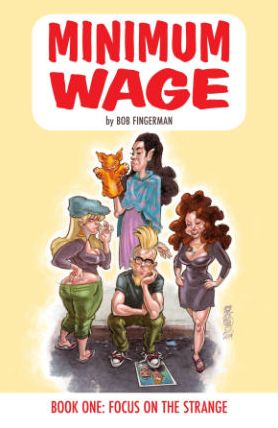 Share:
Bob Fingerman, who South Park / The Book of Mormon's creator Trey Parker has described as "a brilliant satirist, artist and mind," has returned to his signature series Minimum Wage after a fifteen-year break. Spurred by assembling last year's definitive collection of the '90s era material, Maximum Minimum Wage, Fingerman is thrilled to be creating new material. Minimum Wage Volume 1: Focus on the Strange collects the first six all-new chapters, as well as a ton of bonus material including the covers and a huge guest artist gallery featuring pin-ups by Bill Sienkiewicz, Farel Dalrymple, J. Bone, Joe Flood, and Brandon Graham.

Picking up the story in spring of 2000, freshly separated Rob Hoffman is trying to reassemble his life. Only 25, he's going through a divorce, his finances are in ruins, and he's forced to move back in with mom. All around him things are changing. The internet is about to erase his number-one source of income: men's mags. But the internet also offers a new angle on dating, and so begins Rob's adventures as a singleton.

Rob Hoffman, protagonist of the original Minimum Wage graphic novel, returns in a new collection that finds him awaiting the finalization of his divorce. He's living at home with his mother, eking out a living drawing pornographic cartoons, and diving back into the sexual hunting ground that is the NYC bar and club scene. Rob's misadventures in and out of the sheets with three women-a stoner with body image issues, a married post-menopausal children's show entertainer, and a superior from his porn industry job-happen in impressively rapid succession, but all are punctuated by the unshakeable memory of his ex-wife, Sylvia. Rob's world is all-too-identifiable, populated with visually distinct and quirky characters possessing a fleshiness that lends realism to the book's many couplings. Thanks to Fingerman's facility as a writer and illustrator, the city lives and breathes as Rob navigates his way through a maelstrom of urban oddity. Fingerman's previous work was always grounded in candid, realistic examination of the human experience and this tale brings readers more of that, the author's ongoing evolution and maturation as a graphic novelist evident. A humorous and trenchant comic for grownups that leaves the majority of its contemporaries in the dust. - Publishers Weekly