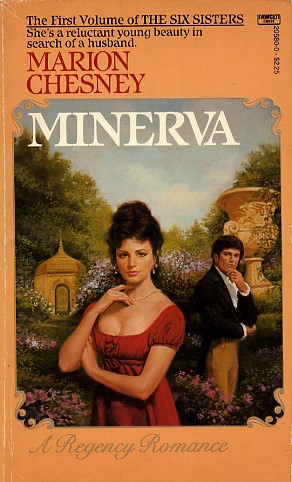 When the Reverend Charles Armitage, an impecunious country vicar in Regency England, announces that raven-haired Minerva, the eldest of his six daughters, is to have her coming-out in London, the news is not well received by the rest of the family.

Poor Minerva. Prudish, self-righteous, and incredibly beautiful, she is to be sent to London to capture a wealthy husband.

But Minerva doesn't know the first thing about flirting. The London dandies find her moralizing appalling and concoct a plan to assault her virtue--an assault that will scandalize all London society.

Meanwhile. Lord Sylvester Comfrey, whom she met earlier through her father, has been keeping a careful eye on the girl. A fact which she resents. She dislikes Lord Sylvester. There is something about him that disturbs her.

Now the plan to destroy Minerva's reputation begins to unfold. And Minerva stumbles headlong into the trap.

But the plotters have reckoned without Lord Sylvester....
Reviews from Goodreads.com