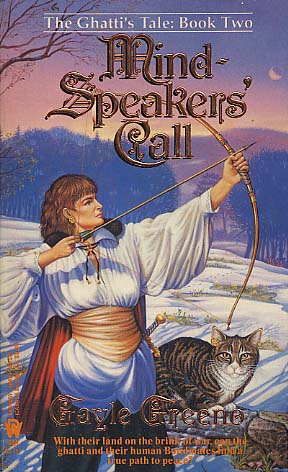 that is what the Gleaners--a mutant strain of humans able to destroy the minds and souls of their fellows--are known as throughout Canderis. It is a reputation that has been only too well-earned by such Gleaners as Seeker Doyce Marron's stepson Vesey, who nearly succeeded in bringing down both the Seekers Veritas and the eumedicos, the two organizations primarily responsible for the well-being of the people of Canderis.

Having thus been made aware that the Gleaners are secretly building their power, the Seekers are sworn to find and put an end to this threat. But Doyce's Bondmate, the catlike ghatta called Khar, has a much more personal mission to fulfill, to break through the mind barriers which Doyce created as protection against a terrifying attack by Vesey. For although Vesey was defeated by Doyce and the united minds of eight ghatti, Doyce remained in shock for months, trapped within her own mind's protective barriers.

But now the Seekers Veritas have need of her services once again, and, recovered or not, she and Khar must join a mission to the neighboring realm of Marchmont. For someone seems bent on creating dissension between Canderis and Marchmont. And even the truth reading skills of the Seekers may not be enough to unravel the twisted threads of a conspiracy that could see Canderis and its neighbor hopelessly caught in a devastating war.
Reviews from Goodreads.com