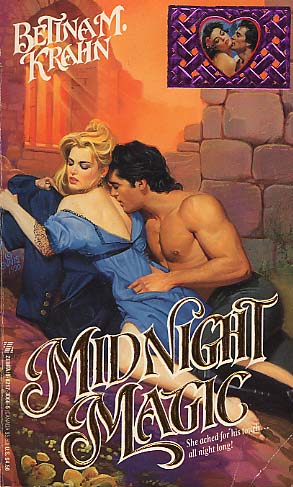 Rane Austen watched his lovely nurse with a wary eye. He'd been in Devonshire long enough to know that luscious Charity Standing was widely believed to be a jinx. And he had nearly been killed by a smuggler's bullet just after he first saw her. But as he studied Charity's shapely curves, the handsome Englishman began to grin. Superstition be damned--a man had to make his own good fortune... especially where women were concerned. Rane imagined how alluring Charity would look with her golden hair caressing her bare, silken shoulders, how smooth her skin would feel against his naked chest... and knew her surrender would make hint a lucky man indeed!

Charity tried to keep the wounded stranger at arm's length. After all, she brought nothing but trouble to all site loved. But it was impossible to resist the intimacy of their situation. She was at his bedside night and day, bathing his lean, muscular body, stroking away his pain. She couldn't help but wonder what it would be like to lie down beside him and feel his heat warning every inch of her innocent flesh. And when at last he took her in his embrace, he was everything she'd dreamed... and more. He scorched her with passion's flames, enchanted her with words of love, and made her his forever with his wondrous MIDNIGHT MAGIC
Reviews from Goodreads.com