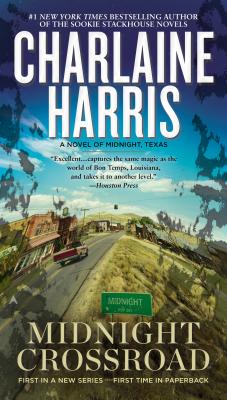 From Charlaine Harris, the bestselling author who created Sookie Stackhouse and her world of Bon Temps, Louisiana, comes a darker locale--populated by more strangers than friends. But then, that's how the locals prefer it...

Welcome to Midnight, Texas, a town with many boarded-up windows and few full-time inhabitants, located at the crossing of Witch Light Road and Davy Road. It's a pretty standard dried-up western town.

There's a pawnshop (someone lives in the basement and is seen only at night). There's a diner (people who are just passing through tend not to linger). And there's new resident Manfred Bernardo, who thinks he's found the perfect place to work in private (and who has secrets of his own).

Stop at the one traffic light in town, and everything looks normal. Stay awhile, and learn the truth...
Reviews from Goodreads.com

Midnight Crossroad is the first book in the Midnight Texas trilogy by popular American author, Charlaine Harris. Midnight, Texas looks like a pretty standard dried-up western town, with lots of vacant buildings and few full-time inhabitants. The people who do live there, as new resident, psychic Manfred Bernardo soon discovers, are a bit unusual, although most are friendly and helpful. His landlord, Bobo Winthrop runs Midnight Pawn during the day; at night his basement tenants, the chilling Lemuel Bridger and the beautiful and very capable Olivia Charity take care of the business. Fiji Cavanaugh, self-proclaimed witch, runs The Inquiring Mind in a cottage left to her by her Great Aunt Mildred, along with her unusual cat, Mr Snuggles. The reclusive Reverend Emilio Sheehan looks after the Wedding Chapel and Pet Cemetery. Madonna Reed cooks wonderful meals at the Home Cookin diner. The aptly named Joe Strong runs the Antique Gallery and Nail Salon with his partner Chuy Villegas. Shawn Lovell runs the busiest concern in town, the Gas N Go, while keeping a tight rein on his pretty daughter, Creek and handful of a son, Connor. Not long after Manfred’s arrival, the body of Bobo’s missing girlfriend is discovered, and suspicion initially falls on Bobo. A pair of strangers also threatens the peace of the town, and Midnight’s residents take steps to protect their own. A diligent sheriff from nearby Davy, Arthur Smith is determined to flush out the killer. After a somewhat slow start as Harris sets the scene, the pace picks up and this novel is as intriguing and enjoyable as Harris’s other short series: Aurora Teagarden, Lily Bard and Harper Connelly. Fans of those series will recognise Bobo from Shakespeare’s Champion, Manfred from the Harper Connelly series, and Sheriff Arthur Smith from the Aurora Teagarden series. Harris peoples this series with interesting characters, her dialogue is witty and sharp, and the plot includes a vampire, white supremacists, gays, kidnapping, Halloween traditions, arson and a truly shocking climax. Readers who enjoy this instalment will look forward to the next book in the trilogy. 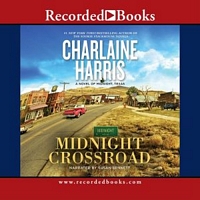