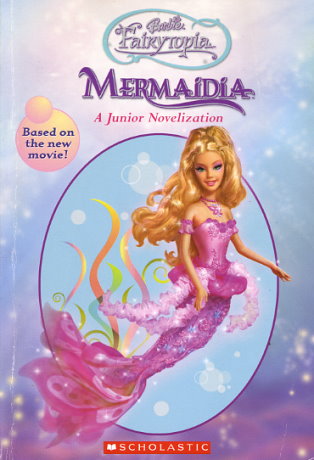 Beyond the rainbow lies a magical place where fairies flutter. . . Fly away with Barbie to Fairytopia!

Once Elina was the only fairy in the Magic Meadow who did not have wings. But that all changed when she bravely stopped the evil sorceress Laverna from destroying Fairytopia. As a reward, Elina got the thing she wanted most -- wings.

Now the people of Mermaidia need Elina's help again. Nalu, Prince of the Merpeople, has been kidnapped by Laverna's henchmen. If he doesn't lead them to the Immunity Berry, a fruit that will make Laverna all-powerful, the henchmen will poison the waters of Mermaidia.

Elina flies to Crystal Cove and meets Nori, Nalu's friend. But Nori thinks she can find Nalu on her own, and she doesn't want Elina's help.

Both girls will have hard decisions to make if they want to save Nalu and Mermaidia. Nori will have to learn to trust Elina... and Elina may lose her cherished wings forever!
Reviews from Goodreads.com