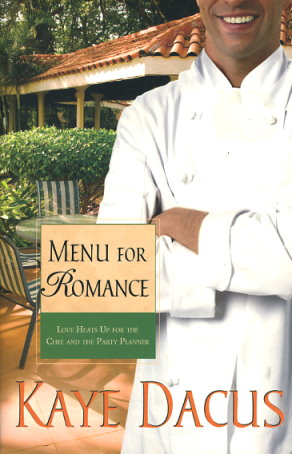 After eight years of unrequited love, Meredith Guidry decides it's time to move on and try to find someone who'll love her in return. So she makes a prayerful New Year's resolution to meet someone new and end her single status by year's end. And when the handsome contractor she hires to finish remodeling her house asks her out, it looks like her prayer may have been answered. But dating Ward doesn't seem to do anything to lessen Meredith's feelings toward a certain chef she works with every day.

Executive Chef Major O'Hara has sworn off relationships, knowing he could never saddle the woman he loves with a family situation like his. When he's offered the opportunity of a lifetime -- to open his own restaurant -- will he leave his comfortable job and Meredith -- to chase his lifelong dream? And when it looks like he's about to lose Meredith Guidry to another man, can he concoct a menu for romance to win her back?

Will God serve up a solution before it's too late?
Reviews from Goodreads.com

Menu For Romance by Kaye Dacus
Boneterre Brides Book 2
For eight years two people have had a secret, they were in love with each other but neither one knew. Chef Major O'Hara kept his secret out of fear and embarrassment. He had a family secret that he feared would close the door between him and the woman he loved. Instead the secret kept them apart as well. When he sees that she is dating someone and it looks to be getting serious...Major needs to make a major decision...Will he fight for the woman he loves or stand back and lose her forever?

Meredith Guidry was thirty-four years old and still single, without even a hint of anyone interested in her. Oh yes, and she already spent eight years in love with a man who also never showed interest in her. She recently bought an old house to remodel and move into, at least she could use her singleness to working on the house since there were no dates in sight...that is until she meets Ward Breaux on New Year's Day, in the hardware store.

Kaye has a book filled with the business of running big events and fundraisers, she has the reader seeing the busy kitchen and dining rooms with everyone bustling to get things together, Meredith buried in paper work in her office and the fun of family meal. She adds humorous moments along with feeling the frustrations. I enjoyed reading this book.

**Received through NetGalley for review.