Me Before You — JoJo Moyes 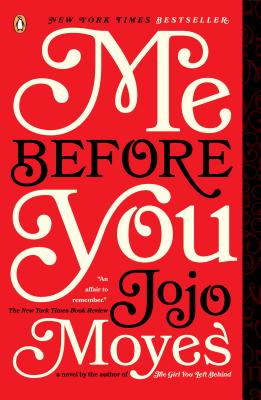 Louisa Clark is an ordinary girl living an exceedingly ordinary life -- steady boyfriend, close family -- who has never been farther afield than their tiny village. She takes a badly needed job working for ex-Master of the Universe, Will Traynor, who is wheelchair bound after a motorcycle accident. Will has always lived a huge life -- big deals, extreme sports, worldwide travel -- and now he's pretty sure he cannot live the way he is.

Will is acerbic, moody, bossy -- but Lou refuses to treat him with kid gloves, and soon his happiness means more to her than she expected. When she learns that Will has shocking plans of his own, she sets out to show him that life is still worth living.

A Love Story for this generation, Me Before You is an unlikely story about two people who couldn't have less in common -- a heartbreakingly romantic novel that asks, What do you do when making the person you love happy means breaking your own heart?
Reviews from Goodreads.com

“This book, this terrible beautiful love story, left me wounded and slightly elated. I finished it at 2 am and was so wrapped in it's nightmarish drama I cried till morning. The pain of the loss, of dreams never to come, of the Hollywood ending I hoped for. No, this story is gritty, heartbreakingly realistic and truthful.
My heart bleed for Will, Lou and his parents. Modern medicine created this level of life, where perhaps it's not worth the pain. We now have the ability to keep someone alive, on the very edge of existence for years. What of the person trapped in the body ? Do they have a choice ? Must they live through unending pain and humilities ? Is that right ? I really don't know and that's what hurt me the most. What choice would I force upon my family if I was faced with this nightmare ? I don't think there are two people who are going to come away with the same experience after reading this book. Life's experiences will tie each of us to different aspects of this tale. I learned something, I felt humbled, and I gained and new appreciation for others.
I don't know how to rate this one. 5 stars is for a book I want to re-read, and I don't want to re-read this. No, once will stick forever. I didn't enjoy reading it, it hurt. It was very good at bringing forth emotions that I like to keep contained. So 4 stars it is

Me Before You is the first book in the Me Before You series by award-winning British author, Jojo Moyes. Louisa Clark’s café wages are much relied-upon: her mum, Josie is the stay-at-home carer for Granddad; all of her sister Katrina’s pay goes to bringing up her own young son; and her dad Bernard’s job at the furniture factory is looking less secure every day. So when the Buttered Bun closes down, Lou needs another job pronto. She’s never worked as a carer before, but the pay’s better than at the chicken processing plant, and Lou’s been assured there’ll be no wiping of, you know, required (there’s a trained carer for that stuff).

Camilla Traynor has told Lou she’s basically needed as a companion for her son, Will, who is a quadriplegic since a traffic accident two years ago. But Will’s anger, his mercurial moods, his negativity, these are an unpleasant, if understandable, surprise for Lou. She’s determined to stick it out: she can’t afford to lose this job. But Camilla hasn’t been entirely honest. Before long, Lou discovers the truth, and finds herself doing her utmost to bring enjoyment into Will’s life.

For anyone who has even glanced at the remarks on the cover of later editions of this book, the trajectory of the story and the ending will be predictable, but such is the quality of the characters Moyes creates, and their dialogue, that most readers will not be able to resist reading to the end, although this, as many advise, is best not read in public. And before that end is reached, there are plenty of laugh-out-loud moments and the odd surprise or two.

The novel is mostly a first-person narrative told by Lou, but with occasional (clearly denoted) chapters from the perspective of other significant characters. Moyes tackles several topical and divisive issues: voluntary euthanasia and the right to die; how quality of life is dependent on perspective; the stigma attached to being disabled, the patronising attitudes encountered and the attendant, if unintentional, discrimination suffered. Ultimately a heart-wrenching love story, this novel is also funny and thought-provoking. 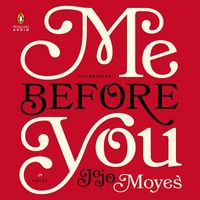 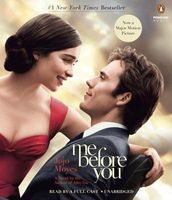