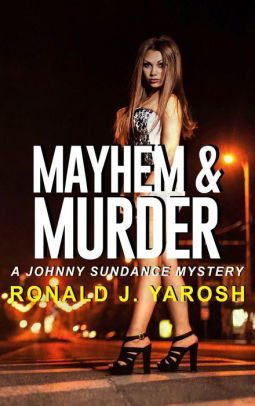 
Women leave with a stranger. They are never seen again––alive.

When their bodies are found, it isn’t a pleasant site. In this stand-alone novel, Private Eye Johnny Sundance takes on a challenging case with all its twists and turns and dead ends. When will the assassin strike again? Who will be his next victim?

The town of Eden Palms, Florida is running scared when they find out that a monster is torturing and killing unsuspecting women.

As the serial killer continues to baffle police, Private Eye Johnny Sundance is called in to find the maniac before another victim is discovered.

Will Johnny solve the baffling mystery, before these despicable crimes are repeated with impunity? Follow along as he uses his knowledge, experience, and powers of deduction in his attempt to track down the vicious psycho. Mayhem & Murder is a standalone novel in the Johnny Sundance Mystery series.

If you like fast-paced, page-turning excitement, that will keep you reading into the night, join the thousands who have read The Johnny Sundance Mystery Series written by internationally read author, Ronald J. Yarosh. Noir has never been better.

BUY Mayhem & Murder NOW, and see if you can figure out who the killer is before Johnny does.