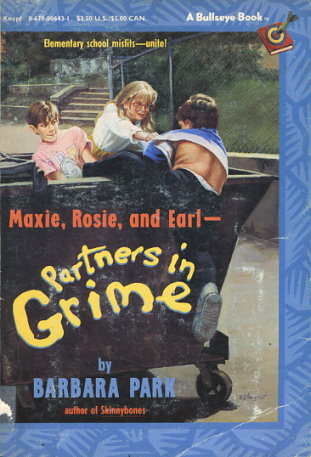 The nerd, the tattler, and the brain

At first glance, they have nothing in common. But by a cruel trick of fate, these three grade-schoolers find themselves waiting to face the music outside the principal's office.

Shy Earl's there because his mouth just wouldn't move when he was called on to read aloud. Nosy Rosie's there because her teacher's sick and tired of her tattling. Then there's Maxie -- smartest kid in his class, so everyone hates him. When he tries to fight for a little respect, he gets thrown out of class.

They know they're three trapped turkeys in big trouble. There's no hope of escape -- hut then the fire alarm goes off. That's when they spot the garbage dumpster....
Reviews from Goodreads.com