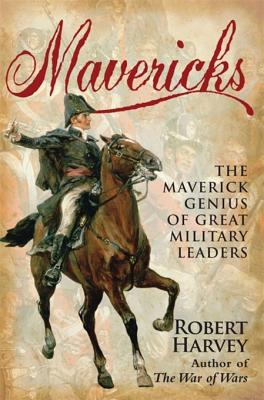 Share:
In an age of backroom generals who command from far behind troop lines, it is often forgotten that wars have been won or lost by the personality and leadership of a maverick commander. In twelve riveting portrait, best-selling historian, Robert Harvey, explores the mind and the action of such men.
From the the Mediterranean sea Harvey investigates what make a military commander different - a charismatic leader of men, rational under fire, unafraid to improvise or lead his men into victory against the odds.
Packed with compelling and insightful analysis and story telling, Mavericks is Robert Harvey's best book to date.
The Mavericks, what made them great and their key battles include:
Clive of India - a master of the decisive strike, and going for the jugular. Plassey.
James Wolfe - renowned by his troops for being as demanding on himself as on them. Quebec.
George Washington - patience, then boldness. Yorktown.
Horatio Nelson - flamboyance, careful planning and improvisation. Trafalgar.
Thomas Cochrane - Fearless commando tactics and an eye for the unexpected strike. Aix Roads.
The Duke of Wellington - style and soundbites, caution and planning. Salamanca.
Guiseppe Garibaldi - charismatic communicator, bold in battle. Messina.
Ulysses S. Grant - Cool and rational, with determination to overcome all obstacles. Vicksburg
Erwin Rommel - Careful calculation followed by bold strikes. Desert Campaign.
George Patton - Aggression coupled with skill in tanks and training.The Battle of the Bulge.
Field Marshal Montgomery - A natural rebel with a lightning mind. El Alamein.
Douglas MacArthur - brilliant communicator and bold, cared for his men. Inchon.
PRAISE FOR WAR OF WARS
'This is the 'definitive' one-volume account of a particularly rich slab of history.' Daily Express.

'... so well paced that reading it is a pleasure.' Bernard Cornwell.

'I doubt a better account of the never-ending war will be written in many a year.' Allan Mallinson.
'an exhillirating sequence of dramatic set-pieces in narrative history's best traditions.' Literary Review