Masters of War — Michael A. Stackpole 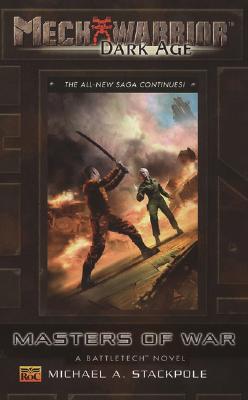 As Clan Wolf launches a daring campaign of reprisal against The Republic, three warriors will find their destinies intertwined on the field of battle, and in the fight for their futures.

Alaric is a legend among the Wolves. But his lust for victory may mean his undoing-unless he learns to see beyond himself. Anastasia is a former Wolf Clan warrior, now leading a band of mercs against her ex-comrades. Now she must prove not only her ability, but her complete separation from the Wolves-in combat.

Verena is the new commander of a ragtag merc force. Her desire for greatness will uncover her own superior abilities, and draw her into a final confrontation in which mercy is unheard of-and only death awaits the unworthy.
Reviews from Goodreads.com