Master of the Chase — Susan Macias 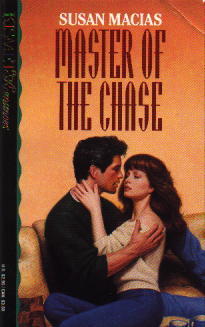 Sweetening the Deal
When Jack Baldwin appeared in the back ofher lecture hall at the Language Institute, Lauren's heart skipped a beat. She'd seen photos of the handsome dark-haired business maverick in countless magazines. And since she'd recently turned down the generous offer made by Baldwin's staff, Lauren suspected that the big boss had come in person to sweeten the deal.

AS one of America's foremost experts on Japanese culture and language, Lauren had been offered aplum position in negotiations between Baldwin International and a Japanese firm. It ws a flatteringoffer, and Lauren had to admit that Jackhimself was persuasive. His powerful presence reminded her of a modern-day warrior on a quest for treasure. But Lauren refused to work for a predatory man like Jack, a man who devoured foreign companies like candy.

Yearsof experience hadn't diminished the thrill of thechase for Jack Baldwin. He always got what he wanted. And at the moment he had his sights set on Lauren Reese, a quiet beauty with mahogany hair and green eyes. She was the key to his usccess with the Japanese company, and he was determined to win her. No matter what the price, he would have Lauren Reese...on his terms.
Reviews from Goodreads.com