Master of Her Heart — Terri Valentine 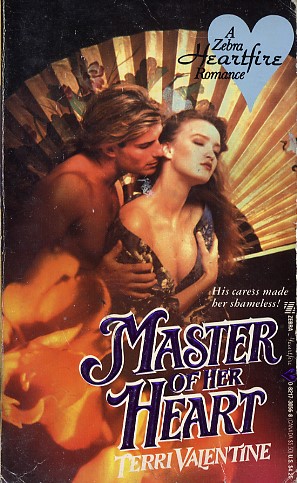 EVIL, WICKED CAPTOR
Intelligent, civilized Garnet Sinclair was so devoted to teaching her Asian students, she'd completely underestimated the dangers that China presented. Not until the blond Englishwoman had been captured by slavers did she believe all those stories were true. And when she met the snake who was responsible -- rich, dissolute Captain Carson -- Garnet cursed him for a devil and tried to escape. But as she struggled against her "master," suddenly his hands were all over her trembling body, gentling and stroking . . . and Garnet found she was mesmerized by his bold, entrancing caress!

EXOTIC, LUSCIOUS MISTRESS
If he hadn't been fulfilling a deathbed promise to his identical twin, Bain Carson would never have discovered how deeply involved his unscrupulous brother had been in the Chinese slave trade. When he saw "White Lotus" on the auction block, Bain couldn't let the delicate beauty fall into unsavory hands. So he bid on the slender concubine and took her home. And though he'd intended to set her free, he was unable to resist the softness of her ivory skin, the sweetness of her ruby lips, and the endless ecstasy that would belong to the lover who could be MASTER OF HER HEART
Reviews from Goodreads.com