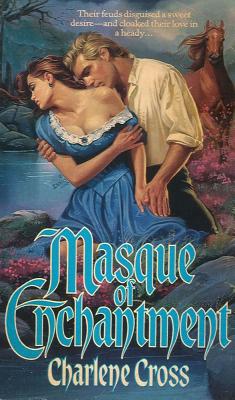 IN THE SCOTTISH BORDERLANDS, SHE WOVE A DESPERATE
FICTION -- ONLY TO DISCOVER HER HEART'S DEAREST DREAM!

Accused of murder, actress Alissa Ashford fled London for Scotland in the drab garb of a prim governess. Her employer, Jared Braxton, was supremely masculine and imperiously attractive, with a manner that sorely tested proud Alissa's assumed meekness. Yet despite their clashes of will, they were one in their devotion to Jared's little, girl whose soul was wounded by her mother's shocking death ... For the mahogany-maned beauty was not the only one with a secret within Hawkstone's magnificent walls. Jared, too, kept his brooding counsel. Driven by the passion that burned between them, he seized on an unforeseen discovery and forced Alissa to become his wife. Still they denied the tenderness that charged their desire ... until they were enmeshed in a deadly intrigue that threatened all they treasured!
Reviews from Goodreads.com