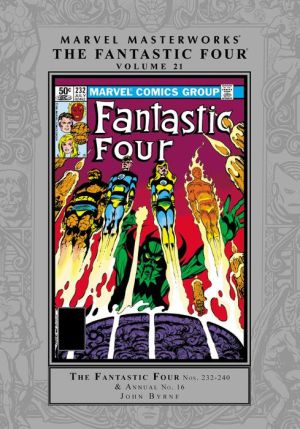 The Fantastic Four are going back to basics, back to Byrne! The Marvel Masterworks is very proud to present the debut of John Byrne in his celebrated run as FF writer/artist. Byrne's deft balance, renewing the characters' core, revitalizing old foes and introducing new concepts, gave the FF a bold vitality. Marvel's First Family were back to the lofty heights of Stan Lee and Jack Kirby. In fact, the Lee/Kirby contribution to FF's 20th Anniversary is one of the many treats this volume has in store. Also included are an Annual by Steve Ditko, the FF Roast and a treasure trove of bonus material. Restored from extensive scans of original artwork, this is the defi nitive edition of one of Marvel's true classics. COLLECTING: FANTASTIC FOUR (1961) 232-240, ANNUAL (1963) 16; FANTASTIC FOUR ROAST (1982) 1
Reviews from Goodreads.com