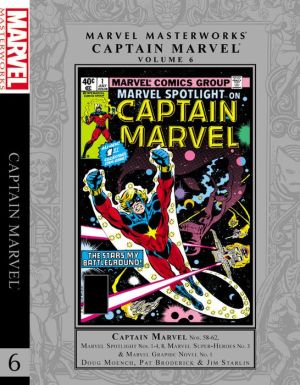 THE SAGA OF MAR-VELL CONCLUDES WITH THIS FINAL CAPTAIN MARVEL MASTERWORKS!

The Marvel Masterworks once again presents Captain Marvel -- and this volume completes his adventures! From the epic Battle of Titan to the all-time classic Death of Captain Marvel, you can now experience every page of his cosmic quest in painstakingly restored hardcover editions.

The action begins with a plan set in motion by Thanos' death. The worldwide computer ISAAC has taken control of Titan in Thanos' name. To overcome the Mad Titan's threat, Captain Marvel and Drax the Destroyer must fight a war on two fronts spanning the solar system. Art turns by Steve Ditko and Frank Miller -- in one of his first Marvel stories -- plus a rare tale held over for years set the stage for Jim Starlin's touching farewell to Mar-Vell. 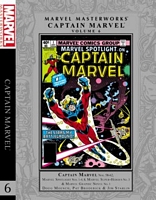