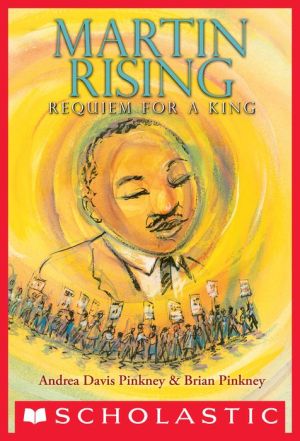 * "Each poem trembles under the weight of the story it tells... Martin Rising packs an emotional wallop and, in perfect homage, soars when read aloud." --Booklist, starred review

In a rich embroidery of visions, musical cadence, and deep emotion, Andrea and Brian Pinkney convey the final months of Martin Luther King's life -- and of his assassination -- through metaphor, spirituality, and multilayers of meaning.

Andrea's stunning poetic requiem, illustrated with Brian's lyrical and colorful artwork, brings a fresh perspective to Martin Luther King, the Gandhi-like, peace-loving activist whose dream of equality -- and whose courage to make it happen -- changed the course of American history. And even in his death, he continues to transform and inspire all of us who share his dream.

Wonderful classroom plays of Martin Rising can be performed by using the "Now Is the Time" history and the 1968 timeline at the back of the book as narration -- and adding selected poems to tell the story!
Reviews from Goodreads.com