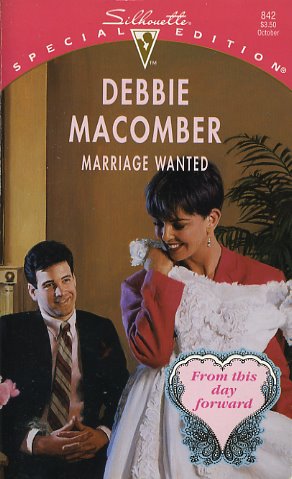 GROOM: Divorce attorney Dash Davenport had seen enough bad endings to know that marriage was a mistake. When he had asked Savannah Charles to marry him, it was out of mutual necessity--not love.

BRIDE: Weddings were Savannah's business and she was an expert on marital bliss. Yet she'd given little thought to her own day of joy. Until Dash Davenport offered a proposal that would benefit them both.

HAPPILY EVER AFTER? Dash claimed he'd never be convinced "I do" could last forever. Yet he'd never expected to marry Savannah-the most passionate woman he'd ever tried not to love...
Reviews from Goodreads.com

Marriage Wanted is the third book in the From This Day Forward series by popular American author, Debbie Macomber. Wedding planner, Savannah is asked by Susan Davenport to plan something within her limited budget for her wedding to Kurt. Her older brother Nash is her only living relative, but is so against marriage she doubts he will even attend. Savannah is determined to give Susan a romantic wedding she will cherish.

Nash Davenport is bitterly divorced, and a ruthless divorce lawyer who loves his sister but can’t condone her marriage. He arrives at Savannah’s bridal shop full of scorn and negativity. How is it, then, that he and Savannah, two people with such radically opposed views of marriage, end up married just a few months later? Another sweet romance from the queen of feelgood.