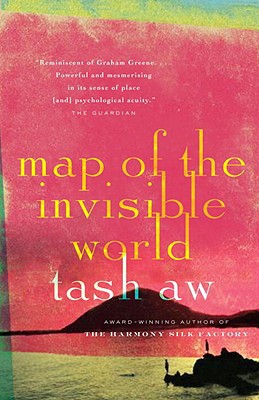 Share:
Set during the tumultuous “Year of Living Dangerously” in post-colonial Indonesia, a stunning follow-up to the international debut literary sensation The Harmony Silk Factory.

Tash Aw burst onto the international literary scene in 2005 with his highly acclaimed, award-winning debut novel. Now, with the same lyrical evocation of an exotic yet tumultuous world that made The Harmony Silk Factory so beloved, Map of the Invisible World is masterful, psychologically rich, and deeply rewarding.

Sixteen-year-old Adam is an orphan three times over. He and his older brother, Johan, were abandoned by their mother as children; then Adam watched as Johan was taken away by a wealthy couple; and now Karl, the artist who raised Adam, has been arrested by soldiers during Sukarno’s drive to purge 1960s Indonesia of its colonial past.

All Adam has to guide him in his quest to find Karl are some old photos and letters — one of which sends him to the colourful, dangerous capital, Jakarta, and to Margaret, an American whose own past is bound up with Karl’s. Soon, both have embarked on journeys of discovery that seem destined to turn tragic.

Woven hauntingly into this page-turning story is the voice of Johan, who is living a seemingly carefree, privileged life in Malaysia, but who is careening out of control as he cannot forget his long-ago betrayal of his helpless, trusting brother.

Map of the Invisible World confirms Tash Aw as one of the most exciting young voices on the international stage.


From the Hardcover edition.