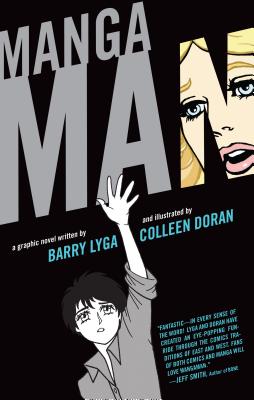 East meets West in this innovative and very smart graphic novel by Barry Lyga, illustrated by Colleen Doran. Sci-fi adventure meets love story -- and East meets West -- in Mangaman, an original
graphic novel for teens.
Ryoko, a manga character from a manga world, falls through the Rip into the "real" world -- the western world -- and tries to survive as the ultimate outsider at a typical American high school.
When Ryoko falls in love with Marissa Montaigne, the most beautiful girl in the school, his eyes turn to hearts and comic tension tightens as his way of being drawn and expressing himself clashes with this different Western world in which he is stuck in. "Panel-holed" for being different, Ryoko has to figure out how to get back to his manga world, back through the Rip . . . all while he has hearts for eyes for a girl from the wrong kind of comic book.
Barry Lyga writes a metafictive masterpiece as manga meets traditional Western comic book style, while Colleen Doran combines manga techniques and conventions with Western comic book
Reviews from Goodreads.com