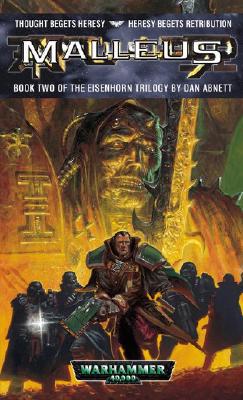 Pellucid blue pane, like a searing wall of acid, suddenly washed through the churning mob behind the Gate. Men, women, soldiers, civilians, were caught in it and shuddered, melting, resolving into skeletons that turned to dust and blew away.

I felt the pain in my sinuses, the throb in my spine. I knew what it was. Psyker-evil.

The prisoners were loose.

I drew my power sword and my boltgun, plunging into the milling bodies, crunching over the calcified bones of those slaughtered by the psychic-wane.

IN THE 41st MILLENNIUM, the enemies of mankind are legion, omnipresent and utterly deadly. While the warriors of the Imperium fight with firepower and faith, the Holy Inquisition hunts the shadows for the most terrible of foes -- rogue psykers, xenos, and daemons. Inquisitor Eisenhorn must track down and defeat the forces who would destroy him or face the wrath of the Ordo Malleus.
Reviews from Goodreads.com