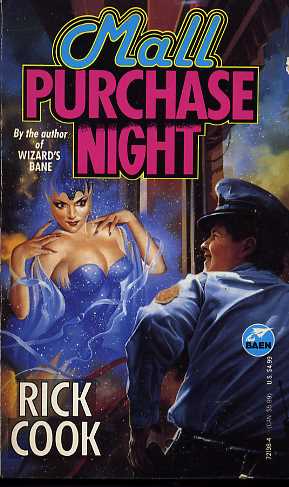 WALPURGIS NIGHT WAS NOTHING TO THIS

When Andy Westin became a security guard at Black Oak Mall he had no idea what he was getting into. During daylight hours the place seemed ordinary enough -- although there is just the occasional flicker of motion from the corner of the eye to mark its strangeness -- but at night, well, things can get pretty wild, what with elven princesses, rampaging brownies, and all.

What happened was that this particular mall, one of the biggest in the world, was built on an elven power source, and not just a garden variety power source either, but an actual gateway between Elfland and Earth. This has made it a source of conflict between some very heavy elven hitters.

The good guys are merely ruthless; the bad guys are evil incarnate and will have your eyeballs for breakfast if they get the chance. On the eve before May Day this battle will overflow the night into the day, and all that stands between thousands of innocent shoppers and the worst that Faery has to offer is one bemused security guard...if the elven princess doesn't get him first.
Reviews from Goodreads.com