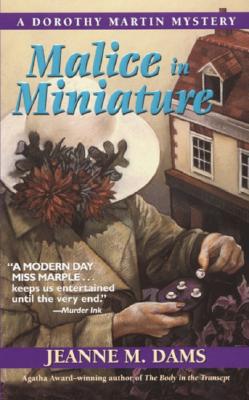 Dorothy Martin's husband, the illustrious Chief Constable Nesbitt, has long claimed that if the Olympics held an event for conclusion jumping, Dorothy would be a contender for the gold medal. Her bold American ways occasionally offend the Brits' proper sensibilities, but even her husband can't deny she has a nose(or perhaps the nosiness) for first-rate investigative work.

When a friend enlists Dorothy to clear her son--who has a wee problem with the bottle--of thievery charges. Dorothy dons one of her most outlandish hats and sets out for the Doll House Museum at the imposing Brocklesby Hall. But two murders put more than a miniature Sevres tea set at stake and Dorothy finds herself maneuvering a complicated plot that is trickier and more dangerous than any of England's daunting roundabouts.
Reviews from Goodreads.com