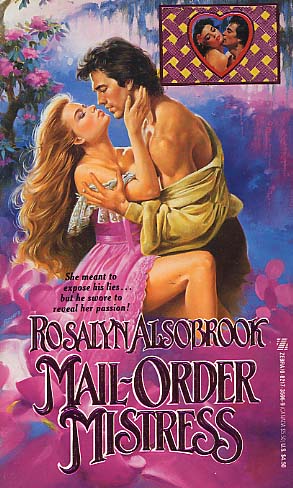 SHE WAS A MAIL-ORDER BRIDE
The mail-order bride business was nothing but a scam! And newspaper reporter Casey Guthrie was ready to prove first-hand that the ads from "promising" bachelors were nothing but lies! But when Casey arrived in Texas to meet her "wealthy, handsome" prospect, she ran into trouble. Tall, dark and irresistible Justin McCade was everything he'd claimed...and more. And though Casey remained determined to find the fly in Justin's very tempting ointment, once she saw the smoldering wanting in his blue gaze and felt the heated massage of his determined fingers, she found it more and more difficult to deny this devil's masterful seduction!

HE WAS A DEVIL IN DISGUISE!
Texas rancher and lawyer Justin McCade was a true rakehell who seduced women with more ease than a stallion running through clover. And when his brother bet Justin he couldn't keep his hands to himself for one month, Justin's pride couldn't refuse. Then Justin discovered his brother had set him up with a mail-order bride! At first, Justin had no problem refusing the prim Casey Guthrie, but as he observed her warm, sensuous nature, and found his attention lingering on her peach-soft skin and ample curves... all bets were off. But could Justin bed this spirited, delectable creature, without losing both his shirt and his heart in the process?
Reviews from Goodreads.com