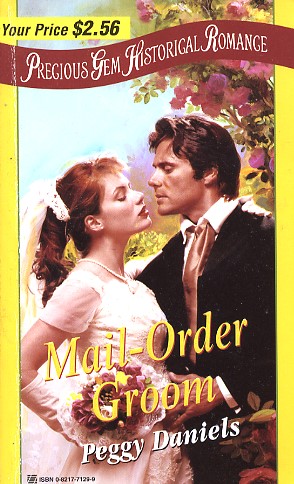 SHE WANTED A TEMPORARY MARRIAGE
Her heart twice broken, Megan Kittridge had given up on love, but she refused to give up on the Circle K Ranch. Her grandfather's will stipulated that she needed a husband to keep it, so she would find one--temporarily. But the mail-order groom who arrived was far from the mild-mannered law clerk who had answered her ad--and his searing kiss made her forget they were to be wed in name only.

HE OFFERED A LASTING LOVE
When Tyler MacKay rescued Megan's shy intended from an unscrupulous gambler, it was clear the man was not cut out for life in the West. Taking his place as a groom for hire seemed sensible to Ty; he needed a place to hide from the outlaws who had framed him for a murderous raid in Kansas. But what he found was a woman whose bravery was equaled only by her stubbornness, and whose love was the one thing he would fight to keep... forever.
Reviews from Goodreads.com