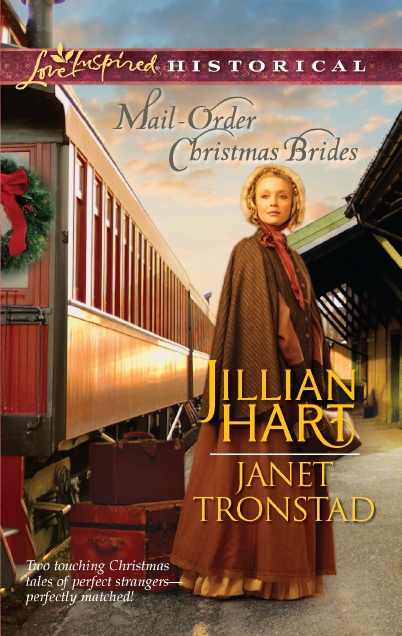 Eleanor McBride's outgrown her dreams of romance -- but not her wishes for motherhood. Wedding Sergeant Adam Martin will give her a daughter to cherish. Yet it's not just shy, sweet Hannah who's captured her affections. And Eleanor's arrival in Dry Creek could be the start of a journey to true love....
Reviews from Goodreads.com

Mail-Order Christmas Brides – Jillian Hart & Janet Tronstad
Her Christmas Family by Jillian Hart
Felicity Sawyer is on her way to be a Mail-Order bride. She is already in love with eight year old Gertie Winters and hopes to love Gertie's dad, Tate,as well and hopefully to be loved in return. After the death of her parents, Felicity and her two sisters were put into an orphanage, her sisters were adopted out but it seemed that she was always passed by, unwanted. Felicity stayed in the town as long as she could in hopes her sisters would find her, but her money and hope ran thin so she has decided to start a new family in Angel Falls, Montana with Tate and Gertie. Only she did not know that Tate was a man without hope or heart.

Tate knew what it was to be kicked when he was down. After trying to do the right thing against the wrong type of people, his wife took their daughter and left him and than he was falsely accused of crimes and sent to prison. Thankfully after his wife died, Tate's sister Ingrid was able to find Gertie and bring her home. He carried failure on his shoulders like his best friend. After meeting Felicity at the train station he knows he will fail her as well, but can he send back this beautiful woman who has stolen Gertie's heart at first sight, and could his dead heart still has a few beats left in it as well?

If you enjoy series you may want to read the first of Jillian's historical books and follow the list down as they all take place in Angel Falls, Montana. The situation in this book is first mentioned in Calico Bride. The list is on my blog under Jillian's Love Inspired book list.
http://justjudysjumbles.blogspot.com/2011/08/jillian-hart-love-inspired-books.html

Christmas Stars for Dry Creek by Janet Tronstad
What a wonderful historical trip back to Dry Creek, Montana. Eleanor McBride has decided to marry now that her father passed away. Her previous employer, Mrs. Stout, helped her with answering an ad for a Mail-Order bride. She was met at the trains station by the neighbors and after twelve days alone in a poorly stocked cabin with very little furniture her future groom and daughter finally show up, with the future mother-in-law in tow.

Sergeant Adam Martin has finished his duties with the army and now it's time to take over raising his daughter. After a fire where his wife died and Hannah was injured, his mother took over rearing the girl. Now Hannah needs a woman who will teach her the ways from back East so she would be ready when it was time for parties and balls. Problem is Eleanor ends up not being who Mrs. Martin expected her to be and now she wants her gone. Can Adam decides he likes the fiery haired Irish gal but is Eleanor willing to split up a family for her own happiness?

We get to meet new friends and old ones like Jake & Elizabeth Hargrove and their children from Janet's first Dry Creek historical; Calico Christmas in Dry Creek. Be sure to have a nice warm drink while these folks fight the frigid Montana temperatures...
The list of Janet's books are on my blog at:
http://justjudysjumbles.blogspot.com/2011/08/dry-creek-series-by-janet-tronstad.html