Magic Pickle and the Planet of the Grapes — Scott Morse 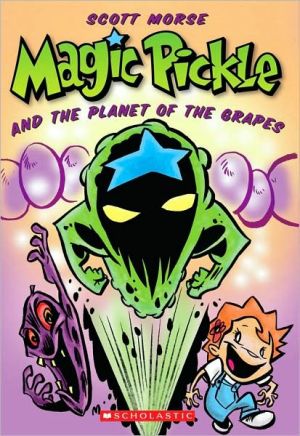 Magic Pickle is a secret weapon developed in a secret military lab -- under little JoJo Wigwam's bedroom floor. The fearless dill superhero meets his match in this feisty eight-year-old. Together they go after Ray Sin, a renegade raisin from the Brotherhood of Evil Produce. Ray Sin has a dastardly plan: to turn every human being on the planet into big, juicy, mindless grapes, so he can rule the world!

Ray Sin has tricked the new kid in town into becoming his hapless helper and is using the class science fair as his cover. He's got everybody in the school -- kids, the principal, even the janitor -- eating big gobs of grapes... and turning into roly-poly purple fruits!

Magic Pickle and JoJo act fast: with the skillful use of a juicemaker, they save the day and capture Ray Sin, whose criminal career is now all dried up.
Reviews from Goodreads.com