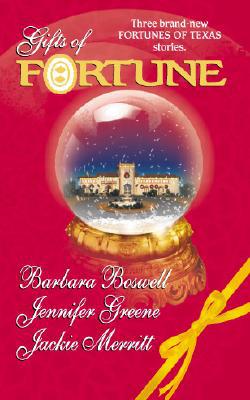 Determined to repay the people who stood by him in his darkest hours, Ryan Fortune bestows on them three special gifts intended to bring love and the promise of family....

• The powerful sheik. Ryan gives wealthy sheik Nico Tan-efi his prized signet ring with hopes that the brooding ruler can woo back his ex-fiancee....

• His daring rescuers. Two strangers are each given a home -- only it's the same house! Can Ryan's matchmaking scheme pull these orphans together?

• The diligent doctor. Two million dollars allows researcher Dr. Maggie Taylor to hire her sexy rival to her cause, only his cause is loosening her tightly leashed passion!
Reviews from Goodreads.com

Gifts of Fortune is an omnibus of three short stories in the Fortunes of Texas series.
In The Holiday Heir, by Barbara Boswell, Ryan Fortune provides his friend, Sheik Nico Tan-efi of Imarco, a cottage where he can try to win back the ex-fiancee he rashly gave up. Esme Bakkar, daughter of a powerful family in the neighbouring country of Rayaz, has been heartbroken since he broke off their engagement. And then she did something foolish, so she knows sheâ€™ll never be accepted as Nicoâ€™s bride now. But is Nico quite as traditional a Sheik as Esme thinks? Esme might be surprised. Ryan certainly will be.

In The Christmas House by Jennifer Greene, Ryan gives two strangers who saved his life the keys to a new home. Sebastian Quentin and Jessamine Mitchell donâ€™t know each other: they first met when trying to pull Ryan Fortune from a burning car. Now they have keys to the same house. Jessa loves the house. Sebastian finds it reminds him too much of his parents, and a tragedy he wants to forget. But Jessa knows the house would be perfect for Sebastianâ€™s work with troubled teens. Will this special house, with its own history, work the magic Ryan hopes for on these two?

In Maggieâ€™s Miracle by Jackie Merritt, Ryan gives Dr Maggie Taylor a very large sum of money in gratitude for saving his life after he was poisoned in a murder attempt. His instruction to her is to use it as she wanted but not to forego romantic love. He knew she would use it to research a cure for her sister, Hannahâ€™s rare blood disorder. For that, she needs the help of the best medical research doctor in Texas, Elliott Sanderson. She takes an uncharacteristic step to attract him to her laboratory, and awakes a passion that neither of them realised was there. This is not Jackie Merrittâ€™s best romance.
Overall, 3.5 stars.