Made of Steel — Terrance Dicks 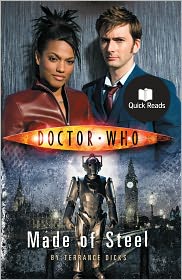 Since its return to the screen in 2005, masterminded by Russell T Davies, Doctor Who has become a genuine phenomenon picking up countless awards, attracting huge audiences and selling lots and lots of books - over half a million so far.

This thrilling adventure sees the Doctor pitted against one of his most famous adversaries - the deadly Cybermen. The first book to feature the Doctor's companion Martha Jones, it is sure to be snapped up by all fans of the show.